Basking in the Golden Glow of the Globes

Yes, it's that time again...when you get to hear what I think about what the stars were wearing.

And to be nice, I'm going to start with the best dressed. It would have been Helen Mirren, but since she just got Best in Show for the Oscars, the award goes to the runner up - none other than little Drew Barrymore, all grown up (and up in general, if you catch my meaning) at last.

Honestly, the picture doesn't do her justice. The dress was lovely, her hair was elegant. She looked like she actually put some thought into what she was wearing, and actually looked into a mirror before she left the house.

Alas, the same cannot be said for poor Cameron Diaz, winner of our When Bad Stylists Happen to Good People award. She put on a brave face - or at least, I think she had on a brave face, somewhere under all that makeup - but you know someone is so getting fired over this.

The Paradox award goes to Jennifer Love Hewitt. I'm baffled by this. How can something be too much but not enough at the same time? It's like that age-old question: What happens when an unstoppable dress meets immovable cleavage? It's a wonder they didn't just cancel each other out, vaporizing into cosmic dust before our very eyes. I'm thinking that the Too Much Hair ran interference in some way, thus saving us all from being sucked into a vaccuum and ending up in some alternate universe where people wear bathscrubbers as formal attire.

The What Did They Do That Was So Bad I Had to Tie Them Up award goes to Eva Longoria. From the back, this dress was adorable. From the front, I just can't figure out why her breasts are wearing a lifting belt. Are they going to be moving furniture later?

This was also the year of the gathered bosoms. Don't believe me? Just take a look:

I mean...really. I'm grateful that the plunging neckline is on the way out, but couldn't we have replaced it with more than ONE thing?

And finally, a little game I call What Were They Thinking?

Next is Ali Larter:

She's thinking: If I smile big enough, maybe no one will notice I'm pulling a Felicity Huffman and wearing my dress backwards.

Next is Nicollette Sheridan

She's thinking: Michael is really taking this roping hobby way too seriously. I can't even move my legs, for Pete's sake.

Finally, we have Meryl Streep: 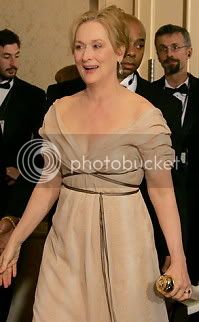 Heck...who am I kidding? I don't have a clue what she was thinking.
Subscribe